The mainstay of any Greek army was the hoplite. His full panoply was a long spear, short sword, and circular bronze shield and he was further protected, if he could afford it, by a bronze helmet (with inner padding for comfort), bronze breastplate, greaves for the legs and finally, ankle guards. Fighting was at close-quarters, bloody, and lethal. This type of warfare was the perfect opportunity for the Greek warrior to display his manliness (andreia) and excellence (aretē) and generals led from the front and by example. 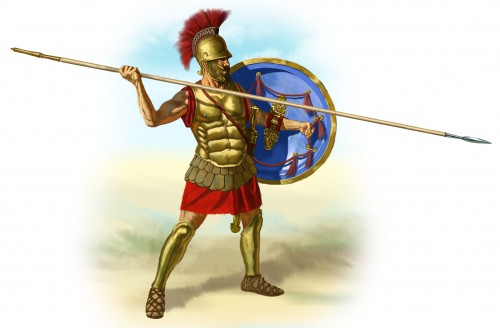 To provide greater mobility in battle the hoplite came to wear lighter armour such as a leather or laminated linen corselet (spolades) and open-faced helmet (pilos). The peltast warrior, armed with short javelins and more lightly-armoured than the hoplite became a mobile and dangerous threat to the slower moving hoplites. Other lighter-armed troops (psiloi) also came to challenge the hoplite dominance of the battlefield. Javelin throwers (akonistai), archers (toxotoi) and slingers (sphendonētai) using stones and lead bullets could harry the enemy with attacks and retreats. Cavalry (hippeis) was also deployed but due to the high costs and difficult terrain of Greece, only in limited numbers e.g., Athens, possessing the largest cavalry force during the Peloponnesian Wars had only 1,000 mounted troops. Decisive and devastating cavalry offensives would have to wait until the Macedonians led by Philip and Alexander in the mid-4th century BCE. 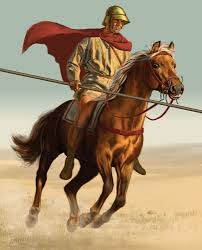 Greek Cavalry
Armies also became more structured, spilt into separate units with hierarchies of command. The lochoi was the basic unit of the phalanx - a line of well-armed and well-armoured hoplite soldiers usually eight to twelve men deep which attacked as a tight group. In Athens the lochos was led by a captain (lochagos) and these combined to form one of ten regiments (taxeis) each led by a taxiarchos. A similar organisation applied to the armies of Corinth, Argos, and Megara. In 5th century Sparta the basic element was the enomotiai (platoon) of 32 men. Four of these made up a pentekostys (company) of 128 men. Four of these made up a lochos (regiment) of 512 men. A Spartan army usually consisted of five lochoi with separate units of non-citizen militia -- perioikoi. Units might also be divided by age or speciality in weaponry and, as warfare became more strategic, these units would operate more independently, responding to trumpet calls or other such signals mid-battle.

An example of the greek army's seperation of troops into units 16 men deep
All credit and sourcing goes to: http://www.ancient.eu/Greek_Warfare/