The Romans employed a number of other weapons as well. For example the pugio was a dagger used as a sidearm by the roman legionnaires. It featured a wide leaf shaped blade and was about 9.5" - 11" long. During the first and second centuries AD, the spathea became a common weapon of choice. The spathea was a longer sword then the gladius, first used by the Roman cavalry but adopted by the infantry. During the late empire the legionaries began to carry the Plumbata, this was a weighted throwing dart. Six plubata could be secured to the back of a shield and they had a greater range then a javelin. Lead weights on the plumbata also gave it good penetration. These weapons proved extraordinarily effective for the Romans, allowing their heavy infantry to operate effectively as their own archers. It is also likely that legionaries would employ slings at times.

Besides heavy infantry the Roman armies fielded other specialized troops. Their light infantry, called velites, employed light throwing javelins. These javelins had greater range then the pila, but lacked their punch. Roman archers, called the sagittarius, their normal weapon was the composite bow, made of horn and wood, and held together with sinew and hide glue. Reinforcing laths for composite bows are found throughout the Roman territory. Roman auxiliaries used a wide range of weapons, whatever the weapons of their particular tribe were what they went into combat with. These weapons could be anything from Balearic slings to Frankish throwing axes. 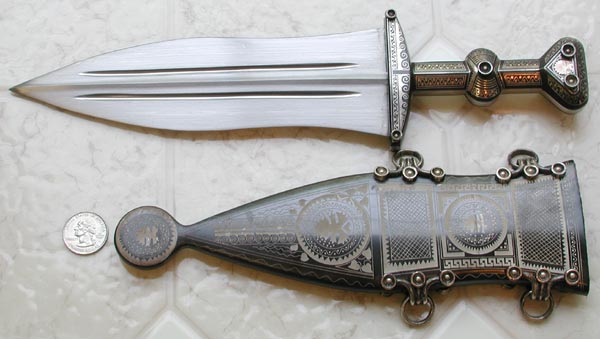