During the Middle Kingdom, between 2030 BC – 1640 BC, the Pharaoh’s struggled to hold on to Egyptian power. They needed to protect their trade routes and resources now more than ever. The era of their complete military dominance was now in the past. The borders were pushed out to their greatest extent yet and the Pharaoh’s were now content with keeping a power balance with the other near eastern empires. Senusret III, Pharaoh from 1878 BC to 1839 BC, and was one of the most powerful kings of this period. He cleared a navigable canal through the first cataract and relentlessly pushed Egypt’s southern border to the second cataract deep into Nubia. He then erected massive river forts including Buhen, Semna and Toshka to protect the new border. He also erected great steles (that’s the plural of stela, large stone tablets) to commemorate his victories and to extol his successors to maintain the new border. 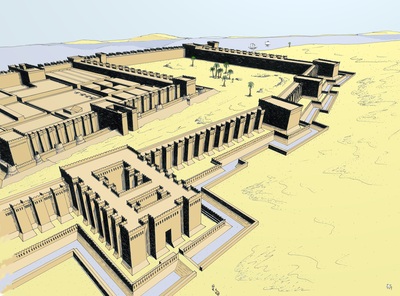 What the Ancient Egyptian fort Buhen would have looked like. 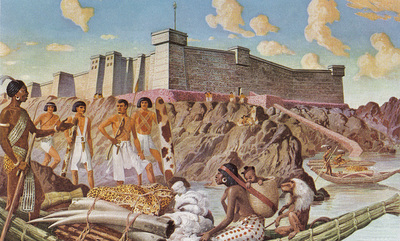 Artwork of Fort Semna
Tactically and organizationally the Egyptian army remained similar to that of the Old Kingdom. Conscripted peasants and tradesmen continued to form the army, although the establishment of garrisons may have added to their professionalism. Tactically they continued to be heavily dependent on their archers. Around 2000 BC the first metal arrowheads made an appearance in their military made from hammer hardened copper. Bronze bladed axes began to appear in the infantry at this time. They were constructed with blade affixed into grooves on long handles. This was a weaker connection then the axes made by their contemporaries that feathered a hole through the axe head that the handle fit through, but it served their purpose of slashing unarmored troops and hacking through hide covered, wood framed shields. New infantry mercenary troops, called Maryannu, were hired from the Levant during the end of the Middle Kingdom. Unfortunately for the Egyptians there had been major advances weapons and tactics had been both developed and found their way into the Near East. The stagnant Egyptian military was on the brink of disastrous defeat. 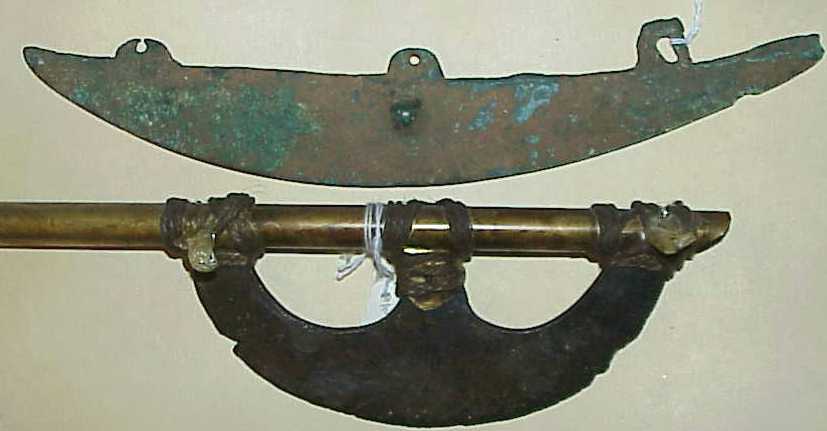 This is an example of an old bronze blade axe used in ancient egypt
What may have started as peaceful migrations of Asiatic workers needed for building projects in the Nile delta ended with the militarily powerful Hyskos dominating the Nile Delta and ushering in the Second Intermediate Period. The Hyskos, meaning “Shepard Kings”, had Canaanite names and were of Semitic origins. They took over the Egyptian capitol Memphis and ruled from Avaris in the lower delta. New military equipment insured their ascendancy and domination of the locals. Archery advances such as, the composite bow, an improved recurve bow and improved arrowheads, were brought by the Hyskos. Infantry advances included various kinds of swords and daggers, a metal bound wooden shields, mailed shirts, and the metal helmet. However, it is their use of the horse drawn chariot that is most commonly cited as their greatest military advancement over the Egyptians. This may be an oversimplification though, there is evidence that both the horse and Chariot were known of by the Middle Kingdom Egyptians, apparently they just hadn’t incorporated them into their military forces at the time.

The early chainmail the egyptian foot soldiers had

The first chariots that allowed Egyptian archers to launch lightning fast attacks against their enemies
The Egyptians that chafed under foreign rule flocked to Thebes in Upper Egypt. Here, on the upper Nile domestic Egyptian pharaoh’s still ruled. The Hyskos kings in Lower Egypt had styled themselves as Pharaohs and added the middle Egypt to their domain. The Nubians, or Kush, took the opportunity to assert their independence, trapping the Egyptians in an enemy sandwich. The Pharaohs in Thebes may first have been content to mine gold and make money off the Red Sea trade to care about their overrun countrymen down river. However, demands of tribute and taxes for access to the Lower Nile made a new generation of Pharaoh’s consider the foreign domination to be blight on their holy land. They retrained their army, adopted the deadly composite bow and built light, fast war chariots to their own specifications.

Seqenenre Tao II, called “The Brave”, the Theban Pharaoh from c.1560 BC - 1558 BC, launched the first assaults against the Hyksos and their Pharaoh Apepi (also called Apophis). His mummies head features multiple, vicious axe wounds; he fell in battle against the Hyksos only two years into his reign. However, his sons would take up the banner of their fallen father.

Kamose, called “The Strong”, the son of Seqenenre, inherited the throne from his now mummified father. Apepi, who had usurped the Hyksos thrown of Lower and Middle Egypt preferred to change the names on old monuments instead of having his own built. You have to admire the old ruler’s consistency. Apepi traded peacefully with the native Egyptians to the South, but like his Father, Kamose despised the Theban Pharaohs subordinate position. In the third year of his reign he launched his attack on the Hyskos, surprising and overrunning their southern garrisons. He then headed straight for their capitol and battled the Hyksos outside of Avaris itself. The city itself was not taken, but the Thebans devastated their fields. Kamose intercepted a letter requesting aid from the King of Kush, wounded from the battle he then sailed back up the Nile and dispatched forces to intercept any aid from Kush. In Thebes he celebrated his victory then died, most likely from his wounds. The Hyksos had been caught off guard, but weren’t much worse off.

Kamose’s brother Ahmose then became the Pharaoh. He was more cautious then his father and brother and waited before resuming the war. Hyksos king Apepi died, he had been a contemporary of Seqenenre Tao II and ruled both Middle and Lower Egypt but at the time of his death the Hyksos had lost Middle Egypt. Kamose’s continuous campaigns and chariot-based army wore down the Hyskos. The Egyptians employed their own weapons and tactics against them, and after several campaigns against it the stronghold of Avaris was conquered. Egypt was once again under the domain of one Egyptian Pharaoh.

The Thebans started to rebel against the Hyksos when Pharaoh Sekenre (or Senakhtenre) Taa became Pharaoh. Sekenre called the Thebans to a battle against the Hyksos, a battle that claimed his own life. Sekenre was succeeded by Kamose, who also attempted to battle the Hyksos, but spent only three years on the throne, before probably being killed in battle. Kamose’s brother Ahmose was far more successful than his predecessors. He battled the Hyksos, and drove them from Egypt. This marked the beginning of the New Kingdom.