The Gladius
The gladius, or Hispanic Sword as they called it, is the iconic short sword of the Roman army. It was adopted from the clans and tribes that lived in Spain. These tribes of Iberians, Celts and a large mixed group called Celtiberians, created hill forts and cities. Tribes of these three groups frequently warred with each other, developing an effective style of warfare but remaining politically divided. During the Second Punic Wars when Rome and Carthage fought to destroy each other and dominate Spain the great Roman General Scipio Africanus took a liking to this "Spanish Sword" and began equipping the legions under his command with the weapon. Scipio then defeated Hannibal, the greatest general of Carthage, at the battle of Zama ending the Second Punic War, this victory has often been credited to his use of the gladius as well as too the defection of a large amount of Numidian cavalry to the Roman cause.

In combat the gladius could be used for stabbing or slashing, although it was primarily used for stabbing. In the crush of battle that often occured when two forces pressed against each other the gladius shined. It was ideal for stabing in these conditions where longer weapons became useless due to the lack of room for long slashing swords and thrusting spears. Roman legionaries constantly practiced with their weapon of choice, learning to make thrusts into vulnerable areas of their enemies such as the groin or neck.

The gladius served the Romans as the main Roman weapon through the rest of the Roman Republic and partially through the Empire (4th century BC - 3rd century AD). The Legions that poured from Rome to conquer the Mediterranean world held this weapon in their hand. The famous Roman weapon delivered victory for to the Romans for 600 years, from the British Isles to Egypt, however, warfare was changing in the third century AD and the Roman's had to change their weapons too. In the late empire new threats appeared from the Asian steppes and darker Europe, mounted warriors like the Huns and Goths required a different army to repel. The Romans began to focus more of their military power to counter mounted warriors, archers and cavalry started taking on greater importance. The old role of the heavy infantry shifted as well, it became critical to defend the infantry from cavalry and so the Romans adopted longer weapons for their infantry. At first a longer sword, called the Spathea was employed, but over time the main weapon of the Roman infantry returned to where it had begun; the spear. 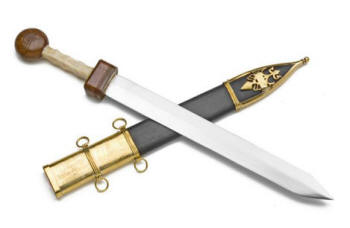 The Roman Gladius
All sourcing and credit to: http://www.ancientmilitary.com/roman-weapons.htm