The orb is a defensive postition in the shape of a circle taken by a unit in desperate straits. It allows for a reasonably effective defence even if parts of an army have been divided in battle and would have required a very high level discipline by the individual soldiers. 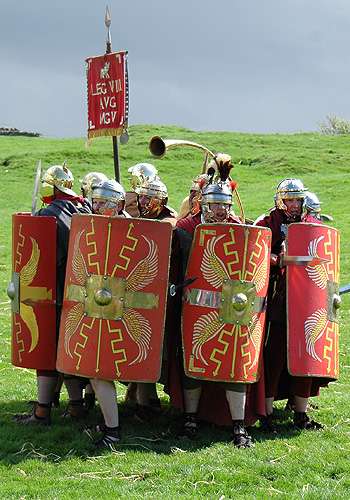 The orb was a defensive formation in the shape of a complete circle which could be taken by a unit which had either become detached from the army's main body and had become encircled by the enemy, or a formation which might be taken by any number of units if the greater army had fallen into disorder during a battle. It can hence be seen as a formation representing a desperate 'last stand' by units of a collapsing army. But also it can be seen as a disciplined holding position by a unit which has been divided from the army's main body in battle and which is waiting for the main force to rejoin them. In either case, it is not a formation one would like to find oneself in, as it obviously indicates that they are surrounded by the enemy. Naturally any officers or archers would be positioned in the centre of the orb, as can be seen in the example above.
Here are seven specific instructions by Vegetius regarding the layout before battle:

1On level ground the force is drawn up with a centre, two wings and reserves in the rear. The wings and reserves must be strong enough to prevent any enveloping or outflanking manoeuvre.2An oblique battle line with the left wing held back in a defensive position while the right advances to turn the opponent's left flank. Opposition to this move is to strengthen your left wing with cavalry and reserves, but if both sides are successful the battle front would tend to move in an anti-clockwise direction, the effect of which would vary with the nature of the ground. With this in mind it is as well to attempt to stabilize the left wing with the protection of rough or impenetrable ground, while the right wing should have unimpeded movement.3The same as No 2 except that the left wing is now made the stronger and attempts a turning movement and is to be tried only when it is known that the enemy's right wing is weak.4Here both wings are advanced together, leaving the centre behind. This may take the enemy by surprise and leave his centre exposed and demoralized. If, however, the wings are held, it could be a very hazardous manoeuvre, since your army is now split into three separate formations and a skillful enemy could turn this to advantage.5The same tactic as No 4, but the centre is screened by light infantry or archers who can keep the enemy centre distracted while the wings engage.6This is a variation of No 2 whereby the centre and left wing are kept back while the right wing attempts a turning movement. If it is successful, the left wing, reinforced with reserves, could advance and hop to complete the enveloping movement which should compress the centre.7This is the use of suitable ground on either flank to protect it, as suggested in No 2

All these tactics have the same purpose , that of breaking the enemy battle line. If a flank can be turned, the the strong centre has to fight on two fronts or is forced to fight in a restricted space. Once an advantage like this has been gained it is very difficult to correct the situation. Even in the highly trained Roman Army it would have been difficult to change tactics during the course of the battle and the only units which can be successfully deployed are those in the reserves or that part of the line not yet engaged. Thus the most important decision a general had to make concerned the disposition of the troops. If a weakness could be detected in the enemy line, it was exploited by using a stranger force to oppose it. Likewise, it was necessary to disguise one's battle line - even troops were disguised to delude the enemy. Often the very size of the army was skillfully hidden, troops packing tightly together to make it appear small, or spreading out to appear large. There were also many examples of surprise tactics made by detaching a small unit which suddenly emerged from a hidden place with much dust and noise to make the enemy believe that reinforcements had arrived.

Vegetius (Frontinus) is full of the oddest stratagems to mislead the enemy or demoralize his troops.
Once the enemy cracked, however, they were not to be surrounded, but an easy escape route left open. The reasons for this were that trapped soldiers would fight to the death but if they could get away, they would, and were exposed to the cavalry waiting on the flanks.

This important section of Vegetius closes with the tactics to be used in the case of a withdrawal in the face of the enemy. This highly difficult operation requires great skill and judgement. Both your own men and those of the enemy need to be deceived. It is suggested that your troops be informed that their retirement is to draw the enemy into a trap and the movement can be screened from the enemy with the use of cavalry across the front. Then the units are drawn off in a regular manner, but these tactics can only be employed if the troops have not yet been engaged. During a retreat units are detached and left behind to ambush the enemy if there is a hasty or incautious advance, and in this way tables can often be turned.

On a wider front, the Romans used tactics of denying their opponents the means of sustained warfare. For this they employed the tactic of vastatio. It was in effect the systematic revaging of an enemy's territory. Crops were destroyed or carried off for Roman use, animals were taken away or simply slaughtered, people were massacred or enslaved.
The enemy's lands were decimated, denying his army any form of support. Sometiems these tactics were also used to conduct punitive raids on barbarian tribes which had performed raids across the border.
The reasons for these tactics were simple. In the case of punitive raids they spread terror among the neighbouring tribes and acted as a deterrent to them. In the case of all-out war or the quashing rebels in occupied territories these harsh tactics denied any enemy force the support they needed to sustain a lengthy struggle.

Source and credit to: http://www.roman-empire.net/army/tactics.html
Powered by