Another weapon that the Egyptians developed with a uniquely Egyptian style was the battle axe. The first Egyptian battleaxes were produced during the Old Kingdom period, around 2000 BC, and were constructed of bronze. Their crescent shaped blades were affixed into grooves on long handles. This was a weaker connection than the axes made by their contemporaries that featured a hole through the axe head that the handle fit through, but it served their purpose of slashing unarmored troops and hacking through the hide covered, wood framed shields used at the time. However, once they met the Sea-peoples and the Hyskos they found their axes to be inadequate and changed their design. Egyptian axes could be used for hacking or be thrown.

Another, interesting and all Egyptian weapon is a fan like axe that can be seen in the top right image titled odd Egyptian weapons. This weapon had a fan shaped head used for slashing, mounted on a pole. However, this weapon isn't a true axe and may have been for ceremonial uses only. 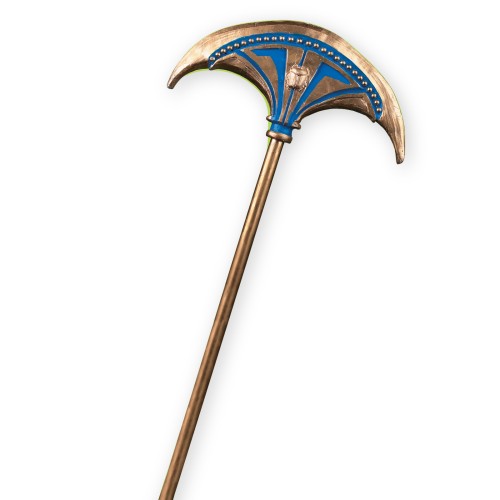 All credit and sources to: http://www.ancientmilitary.com/egyptian-weapons.htm