New Kingdom Military & Warfare
The New Kingdom (1570 BC – 1070 BC) was a time of great change and renewed strength for the military forces of Egypt. The Egyptians had learned much from the Hyskos and they reformed their military into that of a first rate power. During the New Kingdom the Egyptian Empire reached its greatest extent.

A rich, noble warrior class joined the army as Charioteers, shooting powerful composite bows from their mobile platforms. The Egyptians made lighter, more agile chariots then their contemporaries. Two horses would pull the chariot and its two man team, one warrior handling the chariot while the other peppered the enemy with arrows. Spears would be employed for close combat and the warrior usually had some protection. Occasionally scale armor or a shield, but more typically thick leather straps across the chest. It was unnecessary to protect the lower body, as the chariot shielded it. The chariots were the masters of the battlefield during their day, providing both speed and long ranged attacks. The Egyptians preferred to use their chariots to stay out of range of their opponents, while devastating them with arrows. Other Near Eastern empires would send their chariots crashing into enemy formations, creating carnage with blades placed on their wheels (scythed chariots). Uniquely among the powers of the time, the Chariots of Egypt were state owned, instead of by individual warriors. 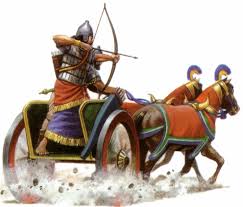 A prime example of how chariot soldiers only had armor for their top half since the chariot covered the bottom half. 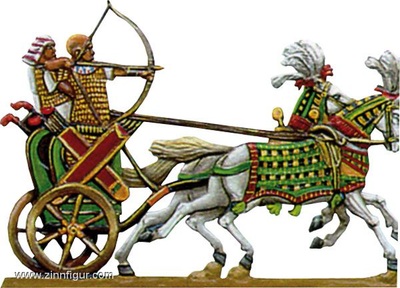 Each chariot usually had two men, one shooting one steering
Advances were also made in the Egyptian infantry. A sword called the khopesh came in to use. This iconic weapon was balanced both for slashing and stabbing and it featured a hook on one site of the blade. The hook could be used to pull an enemies shield down before the khopesh was lunged forward, stabbing the face, neck or chest. Infantry also began wearing armor, scale armor or leather tunics with metal scales sewn on them. Advances in armor lead to advances in axes; the old Egyptian slashing battle axe was replaced by a new piercing one. However, the Egyptians neglected to use the eyehole design of the Hysko’s Axe heads and never achieved their stability. Axes fell out of favor, probably due to a lack of need for armor penetrating weapons in their hot climate, the Egyptians preferred swords. 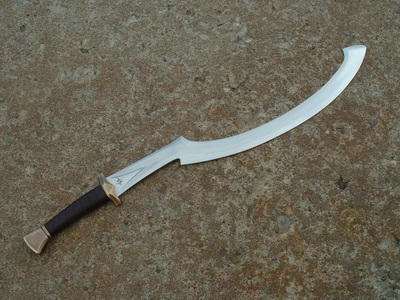 Original design was used in farming but adapted for war. 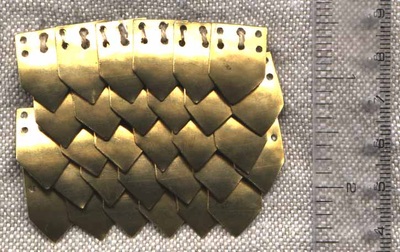 An example of what scale mail looks like
While the superior composite bow, made of layers of bone and wood, was used by the Egyptians of this period, their very high cost and difficult maintenance would have made them less common. Composite bows offered greater range and the ability to penetrate scale armor. However, composite bows required them to be unstrung between uses and stringing them was not a simple task. It took two people and a lot of strength. They were also difficult to maintain, they had to be covered and protected from humidity. Composite bows were also difficult to construct. For these reasons most of the bows used by the Egyptian military continued to be simple bows and recurve bows, composite bows were only given out to the elite troops and this usually meant the chariot warriors.

During the New Kingdom, the Egyptian military changed from levy troops into a firm organization of professional soldiers. Conquests of foreign territories, like Nubia, required a permanent force to be garrisoned abroad. The encounter with other powerful Near Eastern kingdoms like Mitanni, Hittites, and later the Assyrians and Babylonians, made it necessary for the Egyptians to conduct campaigns far from home. Infantry troops were organized into large square formations by weapon type, Archers, swordsmen or spearmen.

Example of square formation by unit type
The New Kingdom also employed mercenaries to fill its ranks Sherden (one of the Sea Peoples), Libyans and Maryannu charioteers where all employed. A group called the Na’arn mercenaries were hired by Ramesses II, an ethnicity from Anatolia. Hebrews tribal infantry may also have served as mercenaries under Ramesses II.

New Kingdom Egypt reached the zenith of its power under the Pharaohs Seti I and Ramesses II (Ramesses the Great), increasing Egyptian territory all the way to Syria in the Levant. Ramesses II campaigned vigorously against both the Libyans and the Hittites, fought in. During the battle of Kadesh Ramesses II fought the Hittites to a stalemate in what was probably the largest chariot battle ever fought, involving around 5,000 – 6,000 chariots. The stalemate resulted in the earliest known and physically surviving international peace treaty. An enlarged replica of the Kadesh agreement hangs on a wall at the United Nations headquarters. 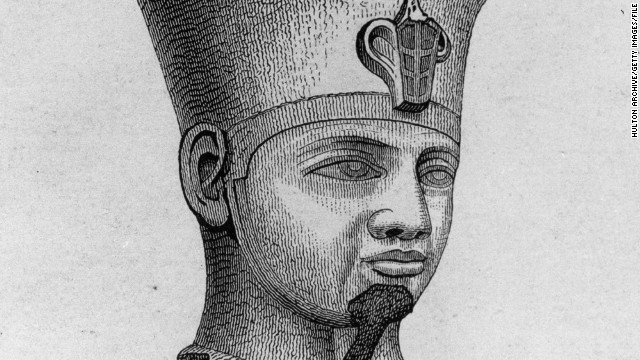 The reorganization and reequipping of the Egyptian military during the New Kingdom allowed them to engage the powerful Near Eastern kingdoms like Mitanni, the Hittites, and later the Assyrians and Babylonians. Egypt’s old enemies, the Libyans and Numidians also required military attention. Without the knowledge gained from the Hyksos the Egyptians never would have survived, especially from the onslaught of The Sea Peoples in the 12th century BC.

The mysterious Sea Peoples, a confederacy of seafaring raiders and conquerors, smashed into the civilizations of the Near East. The ends of several civilizations around 1175 BC have lead to a theory that the Sea Peoples caused the collapse of the Hittite, Mycenaean and Mitanni kingdoms. They definitely destroyed some kingdoms of the Levant and may have been the catalyst for the Bronze Age Collapse (1206 - 1150 BCE). Characterized by the interruption of trade routes and extinguished literacy. In the first phase of this period, almost every city between Troy and Gaza on the Eastern Mediterranean was violently destroyed. An inscription in Egypt reads, “No land could stand before their arms, from Hatti, Kode, Carchemish, Arzawa, Alashiya on being cut down.” Carchemish in fact survived the Sea People's attacks, despite the Egyptian report. However, the ferocity of their invasions is not in doubt.

Egypt proper was next on their hit list, and they needed a miracle, the Sea Peoples had already overrun all of their newly acquired territories in Asia. The army of Ramesses III met the Sea Peoples on Egypt’s Eastern frontier and defeated them in the Battle of Djahy (c. 1178 BC). Ramessess III largely credited his chariots for the victory in inscriptions. This was followed by an attack by the Sea Peoples naval fleet. At the following Battle of the Delta a great sea battle was fought between Egypt and the invaders. Ramesses III hid his navy in one of the many branches of Nile mouth and posted coastal watchmen. The enemy fleet was ambushed, then after a great ship to ship battle the invasion was repulsed. Survivors found in the waters of the Nile were dragged up on shore and executed ad hoc. However, this wasn’t the end, the raids continued for years.

Ramesses III certainly scored a great and decisive victory against the invaders. However, after his death the Sea Peoples settled in Canaan and Palestine. One of these groups may have been the biblically mentioned Philistines, including their champion Goliath. The Egyptians were able to repulse the attack of the Sea Peoples on their homeland, but at a heavy cost. The conflict exhausted the Egyptian military and emptied the treasury to such an extent that Egypt would never again recover to be a powerful empire.

The entire eastern world faced an onslaught from new invaders known as The Sea Peoples and slipped into a dark age. After these brutal conquers were repelled by Ramesses III their old enemies like the Libyans and Nubians rose up and then and invaded. Internal conflict was another cause of the fall of Egyptian power as a sect of priests contended with the Princes for Pharaoh the New Kingdom slipped into the “Third Intermediate Period” and Late period. It is often regarded as the last gasp of a once great culture, where the power of Egypt had greatly diminished. The Sheridans (a Sea Peoples) and Libyans took control of the Western portions of the Nile Delta while the Nubians took control of upper Egypt. The weekend and divided Egyptians were then unable to counter an Assyrian invasion and the lands of the Nile became part of the Assyrian Empire. Egypt was then ruled by foreign powers, the Assyrians, Persians and finally the Romans all were able to conquer and rule the once mighty empire. The Egyptian military would never again be a great force in the ancient world.


All credit and sources to: http://www.ancientmilitary.com/ancient-egypt-military.htm