The Acheamenid horsemen were an important part of the Persian army of the time, not as heavily armoured as the Sassanian Cataphract warriors, but still formidable, the cavalry would be able to launch shock attacks on their enemies at a moments notice.

The Sassanian Cataphract were the Persian cavalry in the Sassanid army. The heavily armored horse and horsemen would be able blaze shock attacks on their foes, the scale armour afforded them suitable defence against projectile attacks, and the speed at which they would close the distance on the enemy would cause fear and panic in the ranks. 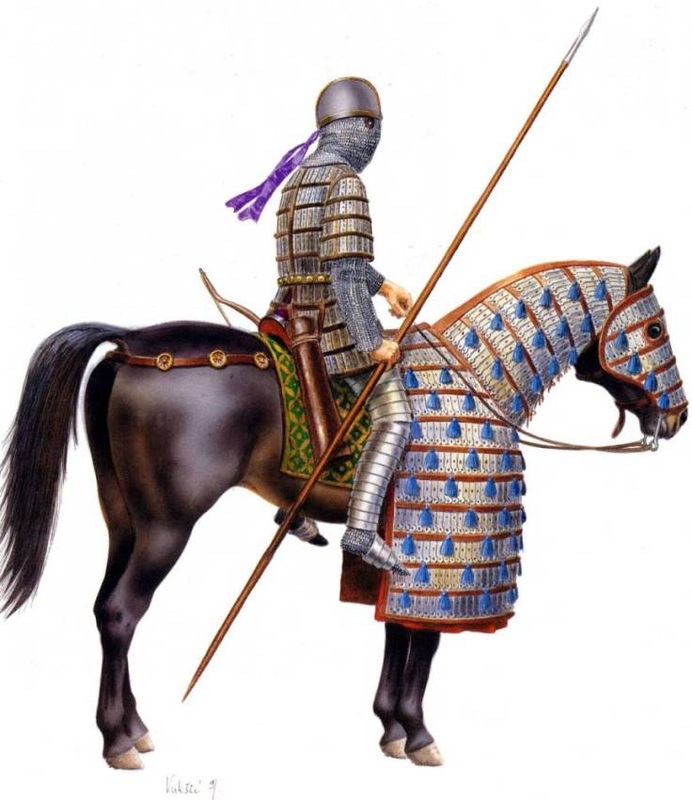 Sassanian Cataphract ready for battle
The Sparabara were the front line troops of the Persian army, and some of the bravest warriors, despite their limited armory. Typically armed with a large wicker and animal hide shield, which the Sparabara would use to adsorb projectile attacks, for offensive work, the shield bearers would be armed with a two foot long spear. Typically well trained the shield bearers were capable and battle ready warriors.

The Persian archers were one of the first lines of attack for the Persian army, they would line up and take cover behind the shield bearers, raining volleys of arrows down on the opposing force. Lightly armoured to allow full movement to fire their bows, the archers would also carry a range of close combat weapons in case they were forced to engage in melee combat.

Widely considered to be some of the best archers of the time, their attacks were considered key in many of the great battle the Persian warriors fought throughout history.

The Persian Immortals were the heavy infantry for the Persian army, their name stemmed from the fact that if one of the Immortals was to fall in battle, they would be instantly replaced by another warrior. The name itself was coined by Herodotus, the Greek Historian and the Immortals themselves were considered to be ten thousand strong, and were also known as the Zhayedan.

An elite fighting unit the Immortals would serve as part of the Sassanid army, and while both the from the Achaemenid and Sassinad empires would be armour and weaponed slightly differently due to the advance in armor and weaponry, their purpose would be essentially the same.

All credit and sourcing to: http://www.legendsandchronicles.com/ancient-warriors/persian-warriors/