The Pilum
The pilum is the heavy javelin used by the Roman legionnaires. Along with the sword, the pilum was one of the main weapons of the Roman military and provided each man with mobile, short ranged artillery ability. It is perhaps one of the biggest reasons for Roman dominance of the ancient world, along with the full body shield and gladius. While Rome’s star was just raising the Mediterranean world was dominated by the Macedonian style phalanx. These ponderous formations presented a wall of spikes to any would be attacker and since the time of Alexander the Great (almost two hundred years earlier) the Macedonian Phalanx impaled and skewered it's enemies in a relentless march forward. However, when the Roman Legions faced off against this force they able to exploit gaps in the phalanxes formation caused by uneven ground and the effects of the pilum.

In the Battle of Pydna (168 BC) between Rome and the Macedonian Antigonid dynasty, the Romans although a first awed by the power of the phalanx, were able to smash it. The balance of power was forever changed in Mediterranean and Rome was shortly to become its new master.

A pilum is essentially a heavy javelin featuring a long thin iron shank (neck) and heavy shaft. The relitvely thin iron shank, with its barbed tip, gave the pilum its extraordinary ability; it was armor piercing. The weight of the shaft and a weight in the shape of pyramid or ball would then punch the shaft through enemy shields and armor. The 2 foot long (60 mm) shaft was designed to be long enough to punch through a shield and into the man behind it. Even if the shaft didn't connect with the man holding the shield then the pilum had the added benefit of rendering the shield useless due to the large javelin poking through and hanging from the front of it. Many of unarmored Germanic and Celtic barbarians were forced to discard their shields due to the pilum, a near death sentence for them on the battle field. An added benefit of this design was that the force of the impact would often bend the shank, causing it to be unusable and saving the Romans from having them thrown back at them.

Roman soldiers typically carried two pilum and they would throw them as they charged their enemies to cause death, discarded shields and confusion among the ranks of their enemies. Modern testing has revealed that a pila (singular for pilum) can be thrown 98 feet but it probably had an effective range of between 50-66 ft. A typical Roman strategy would have been to unleash their second pilum from a distance of only about 15-20ft and then to follow up with their swords, giving their enemy no time to recover. The barbarians that continually assaulted the Romans from the North preferred to open battles with a mass, furious charge of great power. To counter this Romans would throw their pilum into the charging hoard, the impact of would deliver a counter shock, blunting the enemies force before it collided with the Roman battle lines.

Additionally, the Romans found the pilum to be an effective anti-cavalry weapon. Julius Cesar used this tactic to great effect when he ordered a cohort of his legionnaires to use their pilum to stab at the faces of the cavalry of Pompeii during the first Roman civil war in the first century BC.

The origins of the pilum is most likely a result of the Samnite Wars (343-290 BC). These decades long conflicts proved to be a tough trial for the Roman Republic, and they suffered several humiliating and disastrous defeats at the hands of the hill tribes called Samnites. The Samnites fought in a loose order, peppering their enemies with javelins while the Romans fought in a hoplite style, utilizing shield wall (phalanx) tactics. However the rough ground of the hill tribes proved to be unfavorable to the use of phalanx tactics and the ever adaptive Romans changed both their strategy and weapons, adopting a looser "checker board" formation and employing heavy javelins. 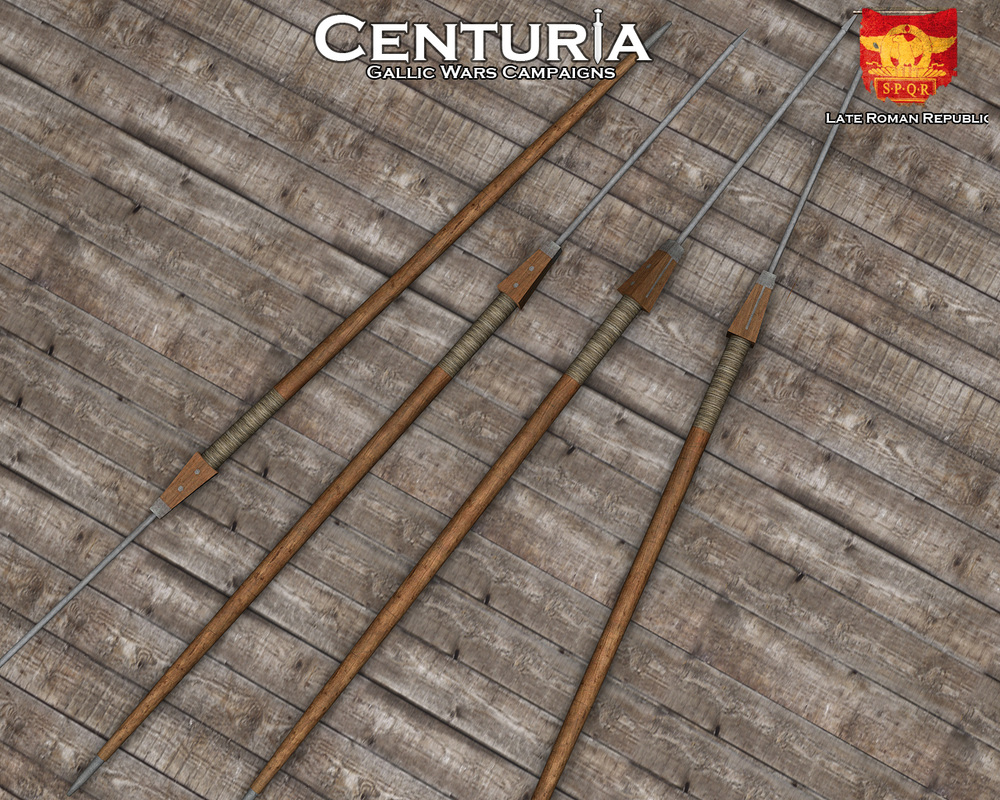