The Battle of the Metaurus was a pivotal battle in the Second Punic War between Rome and Carthage, fought in 207 BC near the Metauro River in present-day Italy. The battle gets a chapter in the classic The Fifteen Decisive Battles of the World(1851) by Sir Edward Shepherd Creasy. The Carthaginians were led by Hannibal's brother Hasdrubal Barca, who was supposed to bring the siege equipment and reinforcements needed in order for Hannibal to defeat Rome. The Roman armies were led by the consuls Marcus Livius, who would later be nicknamed the Salinator, and Gaius Claudius Nero.

Claudius Nero had just fought Hannibal in Grumentum, some hundreds of kilometers south of the Metaurus river, and reached Marcus Livius with a forced march which went unnoticed by both Hannibal and Hasdrubal, so that the Carthaginians suddenly found themselves outnumbered.

Claudius Nero quickly reached Marcus Livius, who was camped at Sena along with the praetor Porcius. Hasdrubal was camped approximately a half-mile to the north. However, since Claudius Nero had conveniently arrived at night, his presence was not detected until the next day, when the Romans drew themselves up for battle. Hasdrubal drew his army up as well, but upon closer observation of the forces assembled before him, noticed that Marcus Livius' army seemed to have grown considerably over the course of the night, and that he had a much larger contingent of cavalry. Hasdrubal remembered hearing a trumpet in the Roman camp heralding the arrival of an important figure the night before — a sound he had become familiar with during his entanglements with the Romans in Hispania — and correctly concluded that he was now facing two Roman armies. Fearing defeat, he retreated from the field.

The rest of the day passed without event, for the Romans prudently did not advance on Hasdrubal's fortifications - rather, they used military strategy to plan an overwhelming defeat for Hasdrubal. When nightfall came, Hasdrubal quietly led his army out of his camp with the intent of retreating into Gaul, where he could safely establish communications with Hannibal. Early on in the march, however, Hasdrubal's guides betrayed him, and left him lost and confused along the banks of the Metaurus, searching futilely for a ford at which to cross.

The night passed with no change in Hasdrubal's misfortunes, and the morning found his army disarrayed, trapped against the banks of the Metaurus, and a great many of his Gallic troops drunk. With the Roman cavalry fast approaching and the legions under the two consuls not far behind, Hasdrubal reluctantly prepared for battle.

The battle was fought at the bank of Metaurus River, the exact site of the battle is uncertain. Indeed sites both to the north and to the south of the river have been proposed.[1] The exact numbers of troops on both sides are not known. The data given by the ancient sources are either insufficient or very contradictory. Appian for instance says that the Carthaginian force numbered 48,000 infantry, 8,000 cavalry and 15 elephants.[2] Livy claims that there were more than 61,000 slain or captured Carthaginian soldiers at the end of the battle and there were still more who escaped the slaughter.[3] These figures look inflated, especially when one compares them with the account left by Polybius. Modern estimates suggest Hasdrubal's army was about 30,000 in strength,[4] and Marcus Livius' army of roughly equal numbers. The propraetor L. Porcius Licinius commanded two legions — as many men as the consul. This means that Livius and Porcius had between them four legions — equal to 32,000-40,000 men, including their Allies. However, the numbers of the allied contingents could have been less than usual due to the refusal of some of the Roman clients to provide auxiliaries. The Roman force was probably further diminished by earlier fighting with Hasdrubal the evidence of which is the presence of several thousand prisoners in Hasdrubal's camp. About 7,000 troops accompanied Claudius Nero. Therefore, it is certain that Carthaginians were significantly outnumbered. The Carthaginians lacked cavalry, of which the Romans had a substantial number.

Like most Carthaginian armies, Hasdrubal's was a mix of many different cultures and ethnicities, including Iberians, Ligures, Gauls and few were of African origins. Hasdrubal right flank was on the River Metaurus and left flank at an inaccessible hilly terrain. He placed his Cavalry at right wing to guard it against superior Roman cavalry that could out flank its right wing. Contrary to this Hasdrubal's left flank was well guarded by hills at left and ravines on front. Hasdrubal's best troops were Iberians, armed with shields and swords, made his right flank, along with the few African troops that he did have (not much is known about these troops — they may have been spearmen drawn from some Carthaginian territory, or from another part of Africa). The center was composed of Ligures who were not as well-trained as the men on his right flank. Finally, on his left, he placed the disorderly Gauls, who he hoped would be shielded by the intraversable terrain (a deep ravine) in front of them. Hasdrubal also had ten elephants in his army. Marcus Livius Salinator, deployed the Roman army in front of the Carthaginian force. The Roman left wing was commanded by Marcus Livius, right wing was under Gaius Claudius Nero, facing the inaccessible Gauls and center was under the command of Porcius Licinus. The Roman Cavalry was placed on left wing in facing the Carthaginian cavalry.

Claudius Nero, on the Roman right flank, struggled to overcome the terrain that blocked his path to the unprepared Gauls on Hasdrubal's left. Seeing the futility in wasting further time attempting to reach them, he instead took half of his men and led them from behind the battling Roman lines to the extreme Roman left, swinging his troops around and crashing into the Carthaginian right flank with sudden force and intensity. The Carthaginian right wing, composed of Iberians, could not withstand this two pronged attack of Marcus Livius from the front and Claudius Nero on their flank. They soon panicked and fled, collapsing onto the Carthaginian center and creating mass confusion.

The Carthaginian general, seeing that there was nothing more he could do, and presumably doubtful of his own prospects of escape or simply unwilling to be taken captive, charged into the thick of the nearly concluded battle and met a glorious, if pointless, death.

Claudius Nero showed no respect for his fallen adversary. He had Hasdrubal's head severed from his body, taken south, and thrown into Hannibal's camp as a token of the brother's defeat.

Lord Byron wrote of the battle:

The consul Claudius Nero, who made the unequalled march which deceived Hannibal and deceived Hasdrubal, thereby accomplishing an achievement almost unrivaled in military annals. The first intelligence of his return, to Hannibal, was the sight of Hasdrubal's head thrown into his camp. When Hannibal saw this, he exclaimed, with a sigh, that 'Rome would now be the mistress of the world.' To this victory of Claudius Nero's it might be owing that his imperial namesake reigned at all. But the infamy of the one has eclipsed the glory of the other. When the name of Claudius Nero is heard, who thinks of the consul? But such are human things.

Though history may not well remember Nero the Consul, the consequences of the battle he won and the Empire which it safeguarded are certainly well-known. With his brother dead and his soldiers routed or killed, and no hope of help from Carthage — which was too preoccupied with its own political infighting to send him aid — Hannibal's hopes of mustering a force sufficient in size and strength for the achievement of his war aims were utterly dashed. He remained in Italy for several more years, unmolested by Rome, and attempted to maintain the loyalty of the Italian allies whom he had won early on in his campaign. It was not until Scipio Africanus led a campaign directly against Carthage that Hannibal left Italy. The two generals faced one another at the Battle of Zama in 202 BC, where Hannibal faced a smaller Roman force and was nonetheless defeated.

Had Hasdrubal succeeded in linking up with his brother, the outcome of the Second Punic War might have been very different. The addition of Hasdrubal's men to his ranks would have swelled Hannibal's army to a number great enough for him to lead a direct advance on Rome itself, and in the event of such a siege, it is quite possible that Hannibal's forces would have succeeded in taking the city. Even if Rome did not fall to Hannibal, the presence of the brothers' combined armies in Italy would only add to the political strife that already existed there, not to mention the anxiety that lingered throughout Rome. History is too unpredictable to say what might have happened had the Battle of the Metaurus not occurred; however, the fact that it did was clearly in the best interests of Rome.

The significance of the Battle of the Metaurus is recognized amongst historians. It is included in Edward Creasy's The Fifteen Decisive Battles of the World (1851), the rationale being that it effectively removed the Carthaginian threat from Rome's ascendancy to global dominion by leaving Hannibal stranded in Italy. Paul K. Davis sees its importance as the "Carthaginian defeat ended the attempt to reinforce Hannibal, dooming his effort in Italy, and Rome was able to establish dominance over Spain."[5] The Battle of the Metaurus is overshadowed by other battles of the Second Punic War, such as Hannibal's great victory at the Battle of Cannae or his ultimate defeat at the Battle of Zama. Nonetheless, the effects of Claudius Nero and Marcus Livius' victory at the Metaurus have earned it a significant standing amongst historians; not only of the history of Rome, but in that of the entire world. 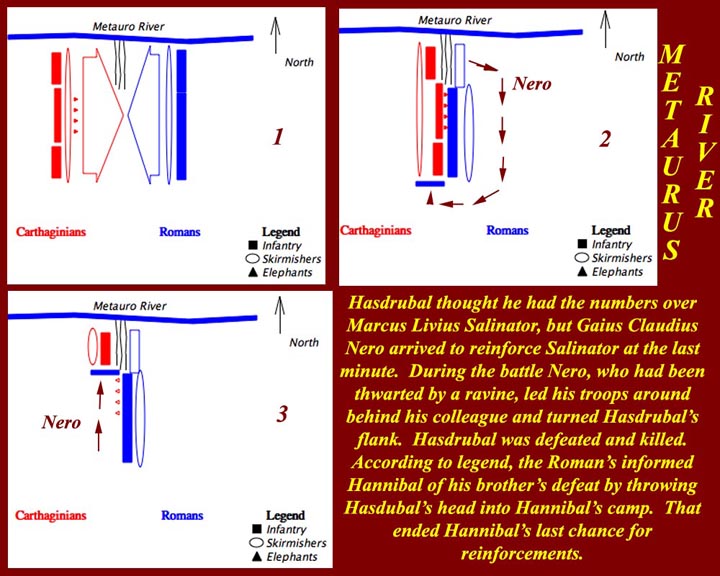 All credit and sources: http://en.wikipedia.org/wiki/Battle_of_the_Metaurus