Information about tactics can be derived from accounts of battles, but the very military manuals known to have existed and to have been used extensively by commanders, have not survived. Perhaps the greatest loss is the book of Sextus Julius Frontinus. But parts of his work were incorporated in the records of the historian Vegetius.

The importance of the choice of ground is pointed out.
There is an advantage of height over the enemy and if you are pitting infantry against cavalry, the rougher the ground the better. The sun should be behind you to dazzle the enemy. If there is strong wind it should blow away from you, giving advantage to your missiles and blinding the enemy with dust.

In the battle line, each man should have three feet of space, while the distance between the ranks is given as six feet.
Thus 10'000 men can be placed in a rectangle about 1'500 yards by twelve yards, and it was advised not to extend the line beyond that.

The normal arrangement was to place the infantry in the centre and the cavalry on the wings. The function of the latter was to prevent the centre from being outflanked and once the battle turned and the enemy started to retreat the cavalry moved forward and cut them down. - Horsemen were always a secondary force in ancient warfare, the main fighting being done by the infantry.

It was recommended that if your cavalry was weak it was to be stiffened with lightly armed foot soldiers.

Vegetius also stresses the need for adequate reserves. These could prevent an enemy from trying to envelope one's own forces, or could fend off enemy cavalry attacking the rear of the infantry.
Alternatively, they could themselves move to the sides and perform an enveloping manoeuver against an opponent.

The position to be taken up by the commander was normally on the right wing.

The tortoise was a essentially defensive formation by which the legionaries would hold their shields overhead, except for the front rows, thereby creating a kind of shell-like armour shielding them against missiles from the front or above. 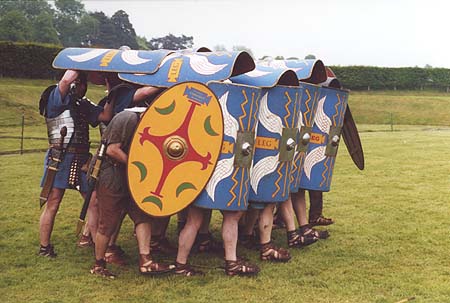 The tortoise formation was one of the prime examples of Roman ingenuity at warfare. When deployed in such a way, the legionaries became virtually invulnerable to arrows or objects dropped from defensive walls.
The wedge was commonly used by attacking legionaries, - legionaries formed up in a triangle, the front 'tip' being one man and pointing toward the enemy, - this enabled small groups to be thrust well into the enemy and, when these formations expanded, the enemy troops were pushed into restricted positions, making hand-to-hand fighting difficult. This is where the short legionary gladius was useful, held low and used as a thrusting weapon, while the longer Celtic and Germanic swords became impossible to wield. 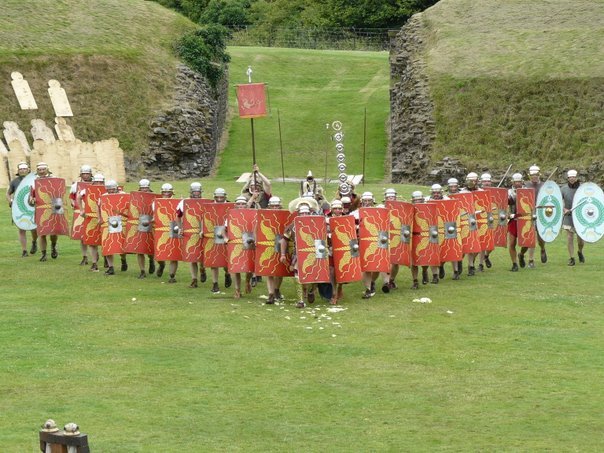 The wedge was an aggressive formation used to 'crack open' enemy lines. Relatively small groups of legionaries could form such a triangle and then drive their way into the enemy ranks. As more Roman soldiers reinforced the wedge from behind, the enemy line could be forced apart. As breaking the enemy's formation was very often the key to winning a battle, the wedge formation was vitally important battlefield tactic of the Roman army.
The skirmishing formation was a widely spaced line up of troops, as opposed to the tighter packed battle ranks so typical of legionary tactics. It allowed for greater mobility and would have found many uses in the tactical handbooks of Roman generals. 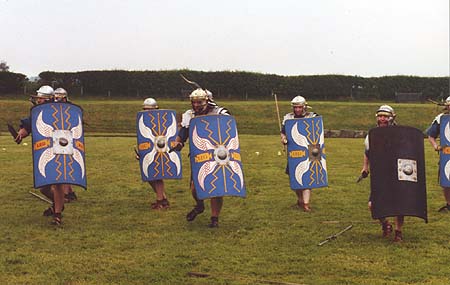 The skirmishing formation is essentially the opposite to the closely packed line of battle used by legionaries. It is a widely spaced line. Every second man of the line has stepped forward a few paces, effectively doubling the amount of ranks. However, the gaps created by this formation are always overlapped by the next line to follow. The roots of this formation are more than likely to be found with the velites, the lightly armed skirmishers who operated ahead of the main force in the early Roman army. The wide spaces allow each soldier great mobility. Its possible uses were manyfold. It would make an advance over difficult terrain much easier. It could allow for swift attacks with subsequent quick withdrawals. It would allow for any friendly units falling back to pass through the formation. It also could be used by a victorious army sweeping over the battle field, killing all that was left in its way.
The order to repel cavalry brought about a the following formation. The first rank would form a firm wall with their shields, only their pila protruding, forming a vicious line of glistening spearheads ahead of the wall of shields. A horse, however well trained, could hardly be brought to break through such a barrier. The second rank of the infantry would then use its spears to drive off any attackers whose horses came to a halt. This formation would no doubt prove very effective, particularly against ill-disciplined enemy cavalry. 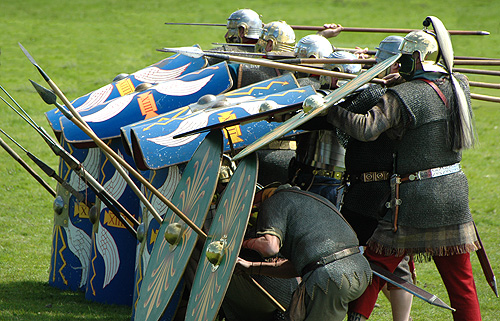 The order to repel cavalry by Roman army officers brought about a defensive formation, in which the front rank formed a tight wall of shields with their pila protruding to form a line of spearheads ahead of the wall. Undoubtedly it would be very hard to bring a horse to break into that formation. The most likely occurrence would be that it would come to a halt of its own will ahead of the spearheads. It was at that moment that horse and rider would be at their most vulnerable against the ranks behind the first line of infantry which would then hurl their spears at them. Given the short distance and the training legionaries received, it is likely such halted cavalry, frantically trying to turn their horses around to retreat, whilst colliding with horses following in the charge, would prove very easy targets. If one further considers the likely possibility of archers being present, the effect of this formation could indeed be devastating.
Source and Credit to: http://www.roman-empire.net/army/tactics.html
Powered by