Evolving from armed bands led by a warrior leader, city militia of part-time soldiers, providing their own equipment and perhaps including all the citizens of the city-state or polis, began to move warfare away from the control of private individuals and into the realm of the state. Assemblies or groups of elite citizens sanctioned war, and generals (strategoi) came to be accountable for their actions and were often elected for fixed terms or specific military operations.

In the early stages of Greek Warfare in the Archiac period, training was haphazard and even weapons could be makeshift, although soldiers were usually paid, if only so that they could meet their daily needs. There were no uniforms or insignia and as soon as the conflict was over the soldiers would return to their farms. By the 5th century BCE the military prowess of Sparta provided a model for all other states to follow. With their professional and well-trained full-time army dressed in red cloaks and carrying shields emblazoned with the letter lambda (for Lacedaemonians), the Spartans showed what professionalism in warfare could achieve. Many states such as Athens, Argos, Thebes, and Syracuse began to maintain a small professional force (logades or epilektoi) which could be augmented by the main citizen body if necessary. Armies became more cosmopolitan with the inclusion of resident foreigners, slaves, mercenaries, and neighbouring allies (either voluntary or through compulsion in the case of Sparta’s perioikoi). Warfare moved away from one-off battles fought in a few hours to long-drawn-out conflicts which could last for years, the most important being the Persian Wars (first half of the 5th century BCE), the Peloponnesian Wars (459-446 & 431-404 BCE), and the Corinthian Wars (394-386 BCE). 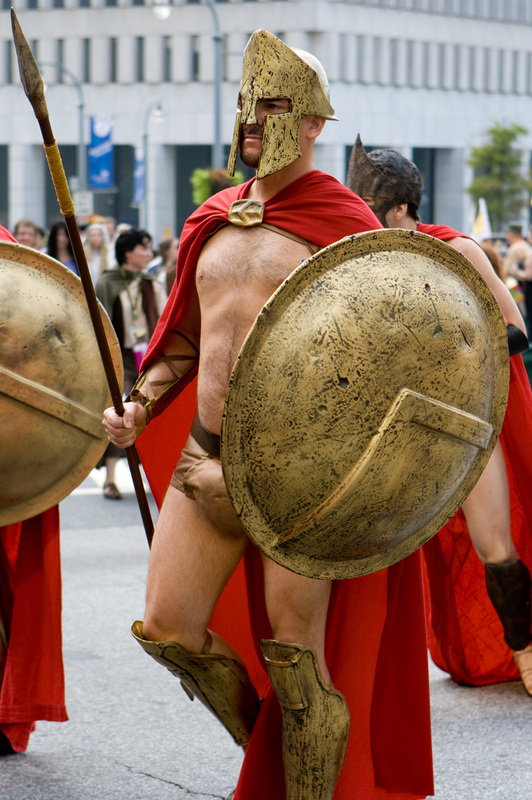 Professional outfit of a Spartan
All credit and sourcing goes to: http://www.ancient.eu/Greek_Warfare/