The Old Kingdom (2686 BC – 2134 BC) was a prosperous time for the Egyptians. It was a golden age when great periods were constructed and Egypt grew rich and influential. This government to become stable and in turn they reorganized the military. The Pharaoh’s began a military construction program placing forts to protect Egypt from incursions from the Libyans to the West and the Sinai and Canaanite tribes to the Northeast. Their greatest conflict during this time was with the Nubians to the South. A string of Forts were constructed within territories taken from them to ensure the safety of Egypt.

During the Old Kingdom, Egypt didn’t have a standing army. Instead governors of administrative divisions called Nomes were required to raise armies. When a force was needed all of the armies of the Nomes would be come together and be commanded by the Pharaoh. However, this created another problem for Pharaoh’s, occasionally Nomes created rival factions and vied for the monarchy in which case they needed to be forcibly suppressed through military action by the Pharaoh.

Egyptian armies of the period consisted of archers and infantry men . Most infantry would be equipped spears, brandishing copper spearheads and a large shield. These shields were the kind that used hides stretched over wooden frames. The design has been tested and it was surprisingly resilient. They are lighter then a pure wooden shield allowing for a larger size and their ability to flex allowed them to absorb blows that shattered wooden shields. Elite troops and leaders would have been armed with copper maces, ideal for bashing lightly armored foes but expensive. Archers carrying simple curved bows and arrows with arrowheads made of flint or copper backed the infantry. The reason the Egyptians returned to the simple curved bow from the recurved bow is unclear; perhaps they preferred its lower maintenance. Nubian mercenaries were said to have been their best archers. 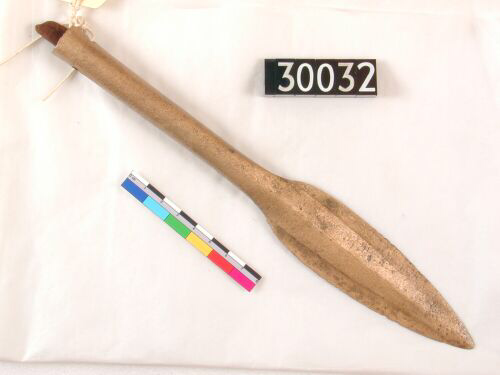 Copper Spearhead from Ancient Egyptian spear
As the pharoah’s of the old kingdom concentrated on constructing their pyramids they slowly allowed more power to fall into the hands of the Governors of the nomes. Upon the death of the 94 year old pharaoh Pepy II Egypt fell into civil war. Without a clear heir the regional powers began to contend with each other for supremacy. Egyptian power waned in the following period, called The First Intermediate Period. Militarily Egypt would never be as secure again as it was in the Old Kingdom, now forced to contend with other rising powers in the near East.
All credit and sources goes to: http://www.ancientmilitary.com/ancient-egypt-military.htm
Powered by