Its form of warfare was based on massed infantry in light armor to pin the enemy force whilst cavalry dealt the killing blow. Cavalry was used in huge numbers but it is not known whether they were heavily armored or not. Most Greek sources claim the Persians wore no armor, but we do have an example from Herodotus which claims that an unhorsed cavalry Officer wore a gold cuirass under his red robes. Chariots were used in the early days but during the later days of the Persian Empire they were surpassed by horsemen. During the Persian Empire's height, they even possessed War elephants from North Africa and distant India. The elite of the Persian Army were the famous Persian Immortals, a 10,000 strong unit of professional soldiers armed with a spear, a sword and a bow. Archers also formed a major component of the Persian Army. 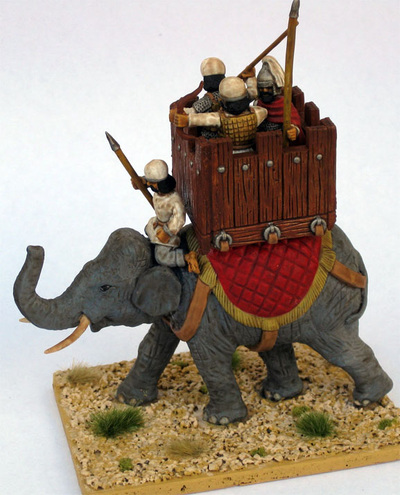 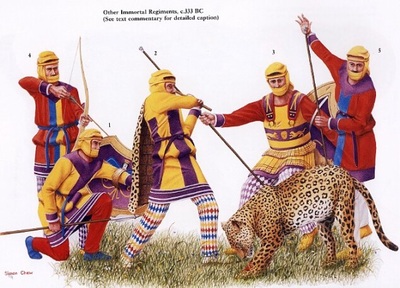 The famous elite immortals that protected Persian leaders
Persian tactics primarily had four stages involving archers, infantry and cavalry. The archers, which wielded longbows, would fire waves of arrows before the battle, attempting to cut the enemy numbers down prior battle. The cavalry would then attempt to run into the enemy and sever communications between generals and soldiers. Infantry would then proceed to attack the disorientated soldiers, subsequently weakened from the previous attacks.

In battle the Persian warriors would be an intimidating force, their sheer number could strike fear in the armies of their foes. With that mass came large scale assaults, and the Persians were fond of projectile attacks, typically bow and arrow barrages. The archers would lie behind a screen of sparabara, the shield bearing troops. From this position the archers could launch volumes of arrows on their enemy while being protected themselves from incoming projectile attacks.

Once the enemy had been scattered by the volley of arrow strikes, the Persian cavalry were now ready to launch a shock attack. The cavalry would use their pace to close the battle lines and bring an assault to the reeling troops.

In certain cases and in the later Persian empire periods, the Persians would also favor chariot attacks, a typical advancement of the cavalry troops, chariots would allow the Persians to not only launch fighters in close but also allow multiple arrow attacks while closing in on the enemy.

The Persian foot soldiers would be able to slowly close the distance now, they were too heavily armoured and equipped to move with the cavalry, but their armor and range of weaponry allowed them to finish the job in close quarters and in melee attacks.


Although many of the Persian empires rulers were great generals it was the tactics that made the empire prevail in most battles. The most common way that Persians won battles was through the use of archery the cavalry might also try to surround or drive off enemy mounted troops but first the infantry wedged their wooden, hide-covered shields into the ground in front of them to act as a barrier. Then they let loose swarms of arrows at their foes during the swarm of arrows the infantry would run w=underneath the arrows so that when the opposing army came out of cover because of the arrows the would be taken by surprise and likely killed by the charging infantry then they would repeat the process through waves of enemy soldiers. 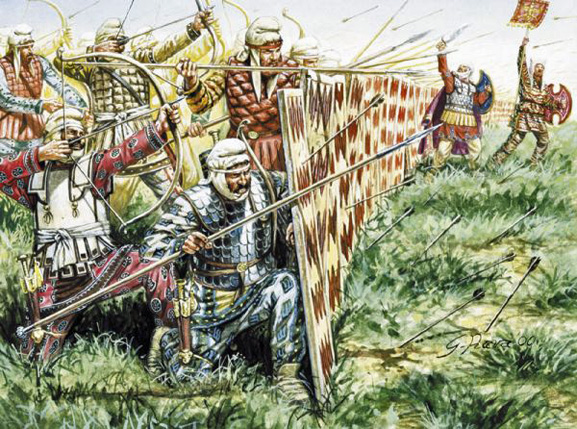 The Sparabara shield troops protected the front line archers
All credit and sourcing to: http://www.legendsandchronicles.com/ancient-warriors/persian-warriors/z